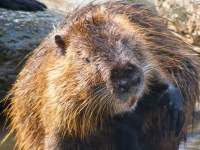 Walking on the banks of le Charenton I chanced to see a very large but cute beast in the water. It looked like a cross between a scottie dog and a rat. Excitedly I told my neighbour. She shrugged and replied “Ragondin – you can eat them”. Seemingly there are thousands of escaped coypu in streams and ditches that are regarded as vermin – but edible. Life has two separate forms here in France. The first form is edible life. The second form is inedible life and comprises of human beings and outside of revolutions and long strikes, their pets. Yes – everything else is edible including all moving parts, bones, organs and plumbing. It’s just the same in the UK but it’s shaped up, covered in yummycrum and sold as swizzle twizzle escalopes. Ragondin makes a delicious terrine or pate I was told – mmmmm.


Tomorrow I’m gonna fly to the UK from La Rochelle. Gilles will be left to his own devices and I know just what he’ll do. He’s gonna go native. I’ve seen him eyeing up the rabbits chez le boucher. The minute I’m gone he’ll be down there. By dinner time the pineau will be out and les garcons will be round to re-find their roots in the soil. Pineau? well that’s another tale from Charentes. It’s a kinda liqueur and it’s definitely kinda nice. When I was a kid in London my father had a scheme to breed meat rabbits. We ended up with over 30 pets and a desert garden. No one ever ate one. He died poor.