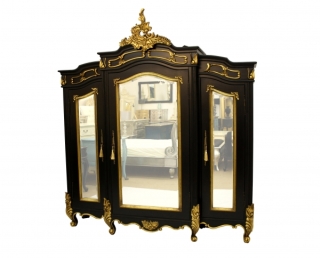 Everything really is a question of scale. Maybe you have a problem. To you it is huge…..but what is the worst that can happen. Could you go to jail? Well, perhaps – but you would be fed and you could write a book and put it out on Amazon Kindle. BUT sometimes there is a problem that is so big that there is almost no solution. Generally such problems involve French furniture. Wardrobe problems are enormous especially if you buy a house agreeing to look after the wardrobes of the previous owner. Then you change the shape and dimensions of the house by blocking doorways, building walls, fitting stoves etc. Then you want to sell the house and move but no potential buyer wants huge wardrobes belonging to some third party. Hmmmm?

” Could you care for a few wardrobes for maybe some years until my children or grandchildren can take them?” Asks a most sympa and creative kind friend. I shrug and set out to see the problem. “You can rope them out of a window on ladders….Oh yes – I have seen this many times…it would be easy.” Much tape measuring and shrugging follows. A window almost big enough is identified in a room with a door too small to admit the wardrobe. ” Some parts maybe can be squeezed and then we can slide it over the tiles until it impacts with the plum tree and then with a few ropes…..” This one will run and run. Watch this slightly too small space. I want to help….I really do!
My neighbour’s daughter is camping in “The North.” Seemingly the whole Northern French experience is terrible. It is cold and wet. Sadly there is no Duke of Edinburgh award for holiday camping in France. I would invent it but I am neither Duke nor French. Travelling North for a holiday in France is like moths scrambling into the shadows. There should be some kinda prize.
Project patio is leaving less and less space and opportunity for la toilette of local cats. Nature abhors a vacuum we are told…..bet they still don’t crap in their own soil.
Emma thinx: Shit happens everywhere. Cat shit happens somewhere else.