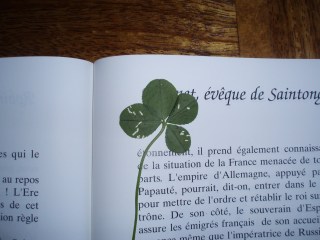 I wonder how many songs we encounter in a lifetime. Some just pass on through but others stick for ever – often to a point of ad nauseam. Some songs just sit there like unexploded time bombs waiting for some trigger years and years ahead. Such a thing happened to me today. The Angel of all Beasts passed by and came over for La Bise (four times remember). She rummaged in her sac and pulled a four leaf clover which she had found. She handed it to me with a sense of great delight. She then showed me one that she had mounted on a card and carried in her purse. Well, today is a bit of an anxious day because Gilles is on a long drive and we have kids wound up like crossbows waiting for various exam results. But now an angel has given me a four leaf clover and I know that all will be well. I just know. Anyway – the unexpected gift plunged me back to the tune “I’m looking over a four leaf clover” performed by Les Perry and his Banjo Maniacs. It was on an old 78 rpm record that my mother had collected from somewhere. I used to play it on my record player when I was a kid. It also had “Bye Bye Blackbird” on the same disc. I never told any of my contemporaries that I played these songs because I guess it was music from the forties or fifties. In any event, this music made me feel immensely cheerful and happy and now the bloody song – banjos and all, keeps playing in my head. The only good thing is that it has driven out “Are we human or are we dancer?” performed by the Baseballs.


A trip to La Dechetterie  had me queueing behind some English folk. Their car registration gave them away of course but I would have known they were not French merely on the basis of the things they were discarding. When French folk throw away junk – it is junk. When English folk throw away junk it is what the French call Brocante. All manner of old metal rods, bits that looked like they would make a plough, trap a ragondin, reinforce some concrete or fix up a combine harvester were crashing into the bin. If Gilles goes to the tip it’s 50/50  he’ll bring home more than he takes.


A while ago the church bells stopped. They have now been repaired and I have been able to take off my watch. Francophiles will already know that in general church bells sound twice at the hour with a 2 minute gap. Explanations are numerous, but it’s probably so that workers get the chance to check twice on the time.It  would never do to miss lunch.


Emma thinx: Someone will need that junk. It may be a long wait for their birth.