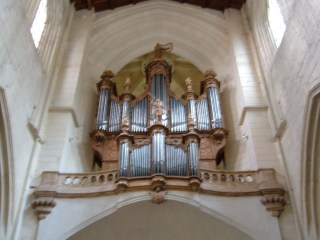 Very few words are worked as hard as “organ”. As I was saying yesterday I was at Saintes. Shortly before my car self terminated (French reflexive verbs are so expressive – we need more in English), I heard the organ playing in the cathedral and had to pop in. I know very little about music and so to me it is a form of magic. The organist was having a right old bash and was creating some arabesque sounds that I had never heard before. I lit my candle to Saint Universe of Beautiful Buildings and carried on feeling in a bit of a spiritual belly dancing mood. It lasted until I came to a halt in a road by the river. Before phoning the dépannage I asked a senior gent what the road was called “It is the road by the river – everyone knows this. But anyway – it will be your battery – oh yes it is always that – I have had awful problems avec myself.” I thanked him and waited for the tow truck in the road by the river. Luckily the driver was a member of the “everyone” tribe who knew where I was. The everyone tribe is pretty big in France and they know most things.


A little later the word organ resurfaced. I told an acquaintance that I had taken to going to a farm shop for my veg’. “You have to be sure that no chemicals are used – otherwise it is no different and it won’t be organic.” She assured me. Well, it tastes delicious and is much cheaper than the supermarkets. The term organic has always been too difficult to me – but generally I find a fair bit of grit inside the lettuce. At least you know it’s been grown in dirt and there must be some carbon in there somewhere.


And of course, there are the organs that concern Romantic novelists. Really I think that there should be a special Organ Thesaurus for we scribblers. We all cast about for some new and perfect way to describe the ACT. I’ve read and written enough cores and manhoods to create a novel set in a monastery apple orchard. The very word organ arouses the British sense of “Carry On” film double entendre like little else. For this reason no one has ever written a Romance where one of the stars has an organ in their front room or even a chest of drawers. Carry on!


I picked up some good words today. The French call computers “Ordinateurs”. They now shorten this to “Ordi”. Well, that’s what I’m gonna call this little machine from now on. They also have an expression for a particular kinda guy. The term is “un chaud lapin”- that is to say a hot rabbit. I see that the charges against DSK were dropped in New York. Ah well, back to the burrow.