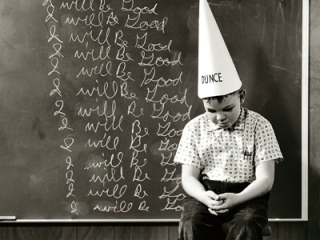 It’s that result time of year. I have never tried my hand at many exams  and so as normal I am rattling on about something about which I know nothing. All the same, I did learn a couple of foreign languages and over the past few years I have coached various students in the UK in French. This year I have heard from my little brood who have all received A or A* grades. Now, of course I am very pleased but just imagine how much more pleased I would be if they could actually speak French! The fact is that at GCSE(The main UK qualification at 16years) and to a certain extent, A.S. levels, the whole thing is about hoop jumping. Huge chunks of the oral exam are learned by heart and regurgitated. I encounter students who cannot pronounce the simplest common words and could not tell you their mother’s name. Little or no attention is given to “freestyle” skills and it is utterly frustrating to have to cram the poor souls with pre-digested parrot food so that they can pass the exam. In many ways I think it would be best to re-name language exams as “Linguistic cultural studies” and have a whole separate subject called “Getting yourself a burger in Boulogne studies”. All manner of extra grades, stars and medals could be awarded. Government supremos could be given whole departments. It is also widely believed that only girls are capable of learning foreign languages. What is actually true is that boys are much more self conscious about getting things wrong and being mocked by their peers. Teachers (I believe) in all subjects fail to understand males and the whole educational process becomes a series of humiliations. Language teaching in schools is appalling and very very few students end up with any worthwhile language skills. THEY ALSO FAIL TO ENGENDER ANY LOVE FOR OR PLEASURE IN THE SUBJECT SO THAT STUDENTS WANT TO CARRY ON IN REAL LIFE.


So – there are no simple answers. Parents and teachers want systems that measure and award. Quite simply there are no prizes for any kind of freestyle. Jump the hoops, get the grades, get the university, get the top job, get money, get kids,get the kids to jump the hoops…… Who said you were supposed to enjoy it? Language teachers hated me.It was mutual. None of us learned anything.


I have a big big problem with cat excrement. The biggest part of the problem is that I do not like it. I imagine that cat loving folk do like it. Maybe it can be processed into soap or candles for Christmas gifts. About 7 pet cats regard my little garden as a public toilet. I have spent hours obtaining flat stones and placing them on all areas of exposed soil. Now the cats leave their delicate whiskered feline parcels on the shallow stones of my path. A walk down the garden is likely to leave me festooned with shit. The aroma of herbs and roses is lost in the reek of shit. I don’t want to be hated as an anti-feline and I think they’re quite sweet but am I supposed to like this?