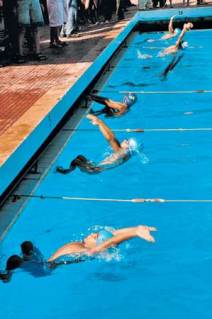 Now, you will remember my great joy at getting my car back! OK – a moment of joy is a moment of joy. Once lived no one can take it away from you. I know this well from my school days when I was selected to swim the back-stroke race in the Gala. This was because I could not swim on my front and you did not have to dive in. When they fired the gun I pushed off from the side flailing my arms in an athletic fervour merely in order to stay afloat and I quite fancied the games teacher. Now, swimming on your back you cannot see and all the other swimmers are creating huge lung drowning bow waves. The municipal chlorine and diluted urine of the pool blinded me. Suddenly I hit the wall of the pool and looked along the line to see where I had finished. There was no-one. I wasn’t a non-athletic, bit freckly, gangly sports failure. I had won! I did a triumphal whoop in the way that sporty triumphant people do their victory whoops. Then I heard laughter. As the blinding chemicals cleared from my eyes I saw that I had turned right more or less at the start and hit the side wall. The back stroking heroes had stayed straight and reached the end of the pool. There were no lane marking thingies – I mean this was a state school in the grubby end of town. BUT – that moment of joy stays in my mind only slightly sullied by what was a very easy mistake to make. So – imagine my annoyance as my car failed with exactly the same fault that had put it in the hands of Le garagiste. Now, so far no names, no flinging of bitchy consumer mud. However, there is a garage near Royan in France that is on my bile radar. I am an optimist.


Gilles, (for new readers, my exclusive French lover) often chides me for blogging about drainage, cars, building work and cycling. He advises that Romantic novelists are supposed to be frilly and fem. Well, of course I am and that is why swimming galas, broken down cars and romantic passion merge into one great wet pulsing thrust in my mind. Recently one of our young ones fell in love. It was lovely except that she was a sly coquettish little vamp, always surrounded by a mountain of fire, dangling a bunch of the sweetest grapes that only the boldest hero would receive. The lad cooed at her like the pigeon on my chimney whilst on the horizon she spotted ever more heroes charging on with swords drawn, slashing at their rivals  to claim the prize of her lust moistened bodice. Stupid little cow! I could have smacked her face.  Now tell me that I’m not a sensitive romantic. In the end he spotted her defective gearbox module and his mind was returned to him. Not before time – and I didn’t say a word. Honest!


There’s mould on one of my jars of bramble jelly. Kids and neighbours braved prickles, stone walls and a cow with suspiciously big gonads to pick that fruit. Oh Universe – preserve us!


Emma thinx: Girls – whatever the game, his mother’s probably played it.