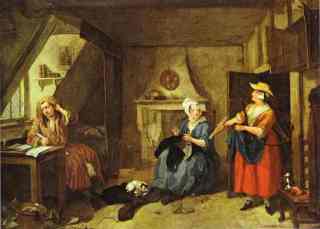 Do you recall the issue of the over-size ancestral wardrobes? Briefly, a friend sold a house but left several huge items of furniture in the house. At the time the new purchaser was happy to use them. Now he wants to sell up and the wardrobes must be relocated. Since the previous sale, the owners have fitted smaller windows, blocked doorways and reduced the size of corridors. Now, these items are not clip together flat pack chipboard. They probably contain more oak than all the ships at the battle of Trafalgar. When I previously blogged about this issue I had been asked if I would become the new guardian until a future time when someone in the friend’s family would have space to keep them and thus secure their continuance in genetic bondage to persons probably not yet born. Finally I had to admit that I really did not want them. It was one of those moments like when someone asks you if you like their poem/book. For a couple of weeks I avoided the issue but finally I have owned up. Suddenly I feel the weight of about 3 tons of oak lifted from my shoulders. The items still sit in the house in a kind of dark threatening sulk. Hopefully some relative will see sense and buy the house. It seems the most obvious solution to me.


All this brings me on to the matter of how you tell sweet kind well meaning people that you don’t want what they want or that you don’t like their poem.(I mean poems are quite hard to like. Most poets only like their own poems and they detest and despise all other poets). I once was a member of a poets group who used to meet and read out their latest meisterwerks. Now, of course I was brilliant and so were the others. However, there was one guy who was apparently a top academic. He also was poet in residence for a local football team. Every week his odes appeared in the programme. I’ll give you a taste.
The wind was rough
Our boys were tough,
The pitch was full of holes.
Our heroes carried on and got
Loads and loads of goals.


Now, you guys probably think I’m having a bit of a laugh but I swear  that this was about the level of stuff. He used to assure me that this was just material for the masses and that his true talent was like a coiled secret orchid- too delicate to release among uncultured ruffians. I never felt that we gelled somehow.


So, having been utterly mocked and defeated as a poet I decided to become a business woman and run a poetry competition promoting my company.(This was pure nonsense but I think I got some kinda tax break on the prize money). I called it “The Prestigious Red Square Prize For Literature.” By the way, if you are doing any kind of promo there is nothing to stop you using words like prestigious, world renowned, sought after and internationally acclaimed. I asked for poems of up to 20 lines. Most of what I received was appalling. Some contestants took a 40 line poem and combined 2 lines in one. But the best was a guy who wrote about a fairy feast saying:
” And all around were little pixies
Eating up their soupy mixes”


Well, it’s bloody hard to get a rhyme sometimes. Gilles and I had tremendous fun judging the entries and in amongst them all was a wonderful poem by a true poet called Maggie Huscroft. I went on to buy her book “Smoke and Mirrors”. We never met but I have great respect for her work. As in all books of poems you end up with a few favourites. “NB – We Eat the Males” always gives me a smile.


Emma thinx: Poets corner? – Yes they can be house trained.