Some things my friends are stranger than fiction. My bearded lady this week is none other than pinnacle of intellectual writers – Virginia Woolf.

Now, I must confess that her style was a bit high brow for me. I did read “To The Lighthouse” a few years ago when I was considering applying to join a Novelists’ Association as a virginal novice supplicant. I knew my lack of lit-cred could be a problem. Her book is said to be the prime distillation of modernist genius. It’s about visiting a lighthouse, or not, or why.  I realised quite early that I was a thicko or at least a neo-post-modernist material girlie philistine.  I knew I needed to improve myself and battled on with “Mrs Dalloway”. It was all about a woman planning a party. Dear me – it was so so so deep into party planning. In the end I shelved the Literary Association ambitions and learned to self publish. I knew my place.

Although not educated enough to really understand her books or even my own split infinitives, I got to like the woman. She had an outrageous sense of fun. She was also involved in one of the first ever Movember stunts. In 1910 Virginia took part in the famous Dreadnought hoax with a group of other intellectuals. Posing as a group of Abyssinian Royals they bluffed their way onto the flagship of the Royal Navy, HMS Dreadnought. All manner of ceremonies and gun salutes were played out in their honour. Virginia herself sported a full beard. Now – that’s my sort of high brow! Me –  I just wander about in Walmart with a false mustache. Sad thing is – no one notices.

To be serious, she was a troubled soul who took her own life. Let’s not forget that the Movember charity is also very involved with mental health issues. SO……

DOWNLOAD OUR BLOODY BOOK. You’ll get a good read and do some good. 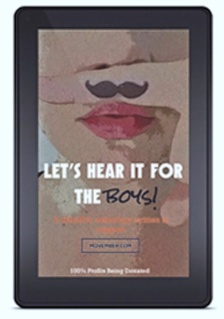 Emma Thinx: When lovin’ is a must, sistas got a stash.