Welcome to the Sunday Snippet… a taster from one of my books to tease and entice you to try some more.

This week, it’s a section from my steamy romance between Anna and Freddie… Passion Patrol Series novel, ‘COMBAT’.

If you like what you read you can grab the ebook edition of this story for FREE right now.  It’s included in  ‘SECRETS AND SUSPENSE’ a collection of stories from great nine authors, (including 3 USA TODAY bestsellers!) available on ALL online bookstores, on this link:

Anna La Salle is a plain-clothes London Met’ Police detective.  On a rainy evening during a transport strike, she ends up forced to share a cab with an enigmatic, attractive stranger.  He’s gorgeous but there’s something about him that intrigues her, something that doesn’t quite ring true. She wishes she could be just a civilian and flirt with this guy just for the fun of it. It’s tough for female cops to meet prospective boyfriends.  So, she lies about her occupation and says she works for her father’s boat building business. She knows enough about it after all. Tie a truth to a lie. What harm could it do? Just this one time…

The cab pushed and swished on towards Buckingham Palace. She saw him studying the famous landmark, as if he were checking out the architecture. In profile his face looked even more male, handsome yet warm. The scar above his right eye constantly attracting her gaze. He was a brute of some kind but he could lie even with his eyes. Once again she found herself responding to him and wanting to touch that scar. In this new world of a few out of reality moments with a gorgeous stranger she could let go, becoming aware of the pulse of life in her breasts and a sense of warmth and longing deep in her stomach. She bit her lip as she consciously allowed these feelings to sweep over her. She took in his striped linen jacket, dark trousers and hand stitched leather shoes. His crisp white shirt accentuated the tanned olive tone of his skin. His shoulders were broad with hard muscular upper arms while his beautifully cut clothes proclaimed the body of an athlete or sportsman.

“So, you know what I do. Do you work in London?” she asked wondering if he would tell her the truth – since she had not!

“Papers?” she questioned too quickly; aware she could be exposing her cover.

He looked at her with a caress in his brown eyes. The cab was at Hyde Park Corner, just a short way from the Hilton. Her heart hammered. Soon he would step out into the night and never see her again. It had to be that way. You could dream but your story was your story. Better just accept and live it out any way you could.

“You have to sell boats tonight?”

“So, sell me one over a drink at my hotel!” he urged leaning forward, “Surely you want to close on a deal like this?”

She tried to pull herself together. This was fantasy trash with an impossible guy – but what was she afraid of? She could handle this smooth operator, maybe even rough him up a bit.

“Then you can tell me – I’d rather look at you in any case!”

Anna gulped as the cab pulled up. This was pure snake oil and she had a juicy apple in her pocket. He looked at her with questioning eyes that ran between her and the opened door. She followed, feeling as if she had gone into free fall from a plane rather than stepping out of a taxi into the busy swirl of Park Lane. As he paid the cab driver, she composed herself. Okay, she was the daughter of Mike Leyton – owner of Leyton Marine – the makers of prestige motor yachts. Clients were always rich and often famous. The flagship Nereus 74 was renowned as fast, luxurious, beautifully sleek and exclusive. When she had last seen her father, the waiting list was at least 2 years. It was this glamorous world of racing car drivers, pop stars, sports icons, celebrity and privilege, on which she had turned her back, choosing instead the hard streets of Brixton as a cop and her own quest for respect and success.

The doorman stood aside and nodded respectfully. She caught a look of recognition in his eye as he watched them. Evidently he knew this guy. They walked to the bar. He was several inches taller than her and broad as a barn door. As she kept up with him she sensed his animal power but also his gracefulness. This was no businessman, or if he was, he was completely wasted. Around him was an air of subtle expensive cologne – but beneath that a hint of male – a slight chemical whisper that had carried on the winds and tides across time and evolution. This was a lone bull with no ring in his nose.

She ordered vodka, not something she would normally drink – but so what? None of this was real! She had stepped out of her life and soon she would have to retreat like the tide. He sipped a small beer. The glass looked ridiculous in his large hand. He smiled and gave her a look that she caught and followed like a slow waltz. As he held her eyes she swallowed – realizing that warm and deep within, she couldn’t stop her physical and emotional response. She sat cross-legged, shifting slightly in her seat, pressing her legs together more firmly knowing that her awareness and focus was sharpening and despite herself she was experiencing a delicious teasing pleasure – God she was simply letting herself go! She had boarded the roller coaster and it was clicking up the slope towards some kind of ride…

To find out the rest of Anna and Freddie’s story, download ‘COMBAT’ in the FREE boxset ‘SECRETS & SUSPENSE’ on this link: https://books2read.com/SecretsandSus 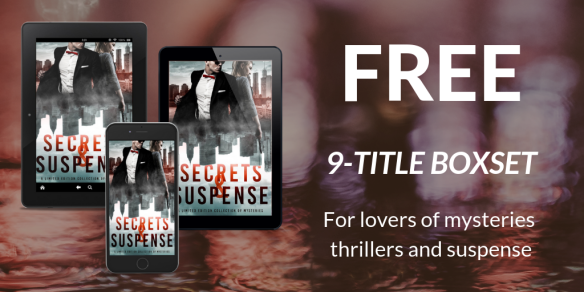 ‘COMBAT’ is Also available as an audiobook and paperback from Amazon worldwide: