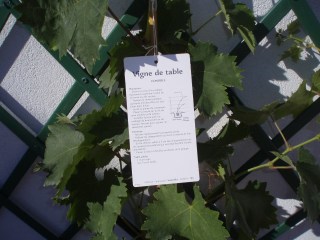 It’s over. Gilles was off work today and finished La Terrasse. The feeling is a bit like the ending of the Tour De France. In some ways I just can’t believe it’s over. A full meeting of the Tribunal de Terrasse took place. The newly planted grape bush (VIGNE) was applauded. I felt re-accepted into the community. Visitors piled in, including the local Angel of all beasts. “C’est formidable! – what a job – oh yes- when you said ten days I discussed it with my husband – he says ‘no way’- he knows of zeese mattairs”. A lot of kissing and hand shaking followed with advice about soil for grape bushes and something called “cépage”. A neighbour muttered about new plants being close to his wall.


It’s just not like England you know! Now – I am a Francophile. This is why I am here. However, anyone not French thinking of living in France must accept that this is an entirely different culture. In a sense you are interfered with in a manner beyond all normal Anglo Saxon boundaries. Your speech, behaviour and gardening are matters of public debate and concern. However, all manner of other stuff is secret and private. All kinds of disputes and dis-likings are hinted at but never explained. One neighbour mentioned another resident and asked if I had an opinion. I had very little to say. “He is an old Schnook” she informed me. Later on I saw them chatting. He was saying that the new road works might affect her drains and that she should join him in talking to Monsieur Le Maire. She shrugged and glanced at me. This is how you deal with Schnooks. The point of this ramble is that here you are somehow public property, but locked in to a secret society of alliance and opinion. This is France.

Amongst all the gardening advice came much guidance on the civil disorder in the UK. ” Army commandos – yes this is the thing. Shoot them dead. All this stuff of no job etc – this is a pretext. Yes – shoot them dead and guillotine the others. It is interesting to me that as yet no one has defended the action of the rioters and looters. I don’t suppose they care, but this is a street politics society. No sympathy here guys!
My neighbour’s dog wandered in to the garden and ate a lot of the cat shit. To be honest I’ve never been very sentimental about animals. I would like to dress this up for you but you cannot deny bald facts. I must build it in to my next super swoon love Romance. He has a dog. She has a cat. They meet over a dog’s dinner. It’s about mutual need…..C’mon all you movie guys – this has to be the blockbuster of all time!
Emma thinx: The truth can be revolting. No revolution can change it.