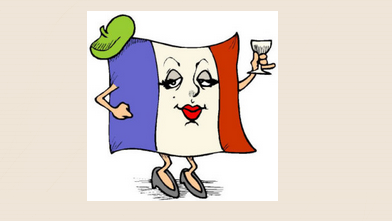 Stop #6 on my Children’s Fiction Book Tour is back on ‘It’s Not All Gravy’ – this time for a chat and a lovely glass of wine with Maryann, tlaking about the about inspiration behind Alf The Workshop Dog.

Here’s the REAL Alf who spends his days in an busy inner-city bus garage.

Find out how I worked backwards from meeting this little mutt to the mythical ancient kingdom of Zanubia, an evil king and a kind time-travelling prince – visit Maryann’s blog here.

Day Five and my Book Tour is visiting the blog of Maryann Miller which is called  It’s Not All Gravy.

She has kindly hosted all three books in the ‘Once Upon a NOW‘ series and includes a review of ‘ALF THE WORKSHOP DOG‘.

With a daughter who is a graphic artist she was particularly interested in the illustrations in the book. 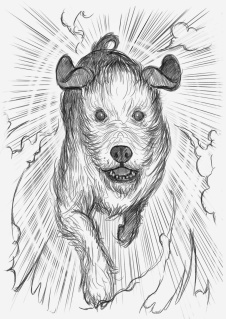 I also know she downloaded one from the book to colour-in for herself.

Find out why she highly recommends these books for children of all ages..

Stop number four on my Book Tour for the Once Upon a NOW series is at the wonderfully named review site “GRAB THIS BOOK”.

It’s great to get a dad’s perspective on my children’s books.  As a mother of sons whose father was frequently away and busy when they were small, I always felt it was a shame they never got to share special reading time with him.

It’s wonderful to be allowed in to this father and son’s story time and share an 8year old’s perspective on Alf The Workshop Dog.  What a perceptive young man – and what  a lovely review.  Thanks to the little chap for telling us how the book made him feel.  Thanks to Dad for  hosting us on his blog.

Interesting too that the lad is now demanding to be a regular guest on his dad’s blog.  The next generation of reviewers is here!

Take a visit and hear their thoughts on Grab This Book.

Today is the first day of my tour of literary blogs for Children’s Fiction.  Arranged via the wonderful efficient staff at CandleLit Author Services, it will feature my ‘ONCE UPON A NOW SERIES’ of modern fairy stories for kids.

The tour includes guest posts by me about the inspiration behind each book and reviews by readers old and young.  There is also a giveaway where you can win a complete set of the series in audio book, paperback or digital Kindle formats.

Today’s Pinterest reveal is a most wonderful piece of jewellery. You can see my full post on Celtic Connections. The site is owned by Melanie Robertson-King. She’s a silver medalist sword dancer from the 1000 Island highland games. That’s a big Wow from me. There’s just gotta be a story to write around that. She also writes fiction where the sword of authenticity enhances the drama. Check out her novel A Shadow in the Past.

Emma Thinx: If he means to give you a ring he’ll know your number.

The first review for Shannon’s Law goes to…. Jenny Marston, a UK uber-blogger and book reviewer.

I do believe she liked the book…

Luckily the rear end of my book was bare and still in production so I was able to include an excerpt before the launch-day print run and publication.

She was closely followed by Anneli Purchase from Canada and Petra Rovere from Slovenia.  They enjoyed it too and are also quoted.  Watch this space for their reviews later in my Pinterest Reveal Blog Tour

I can’t thank my early reviewers too much. All feedback is welcome and hard to get. I feel very privileged to have folks out there who have given me their attention above the clamour of this world.

Emma Thinx. A true friend knows your flaws and defends them.

To celebrate the pre-launch blog tour of Shannon’s Law I have set up a fabulous Rafflecopter Giveaway with a first prize of $30 £20 €25 Amazon Giftcard and of course, paperback and digital copies of Shannon’s Law.  All entries are free – you can gain extra entries by commenting daily on blogs hosting the tour, following on Facebook or Pinterest etc.

To make the party go with a swing, all entrants get a FREE digital copy of “Cop’s Kitchen.” This is the companion cookbook to the romance – so you too can cook the meals and recipes that Shannon enjoys in the story.


The Rafflecopter giveaway runs from 1st of February 2014 and finishes in early March.

Roll up. Roll up. It’s all the fun of the fayre.


Emma Thinx: You’re in the soup when the cops throw the cook book at you.

Find out about the real life stately home that inspired the creation of ‘Bloxington Manor’.   My international blog tour continues in the USA on the Writers and Authors Blogspot:
http://writersandauthors.blogspot.co.uk/2014/02/how-im-launching-my-book.html

You can also visit and follow my Pinterest Board which assembles all the posts in the tour as they are revealed.

Day one of the “Shannon’s Law Pinterest Reveal Virtual Book Tour” kicks off by getting down and dirty…. in the allotments.

Read all about it on Nancy Adam’s blog

The tour runs throughout February until the launch on 28th. At each stop new background info about the characters, locations, food, music etc. from Shannon’s Law will be revealed….

I know I shouldn’t be excited. The launch of Shannon’s Law looms near. It’s all ramping up. The very merry month of February beckons. I’ve turned down deals from big players out there. I have deflected the harpoons of literary whaling fleets. OK – solid day-after-day writing and marketing novels has expanded the blubber a little. I’ve invented marketing strategies previously unknown to man. I’ve already unveiled Cop’s Kitchen, the recipes for hot plated action love that accompany Shannon’s Law. Today I reveal the pre-release trailer of the main event. This trail follows the course of my Pinterest board which I created during the formation of the book.

Pinterest is a major online resource if you are planning anything from a wedding to the launch of a moon rocket. It’s a giant online scrap book. It lets you save the image and the information behind it including the URL link. You could use it to plan a book. You collect all your ideas and images and then follow the trail.
As Shannon’s Law has unfolded, I have created a private Pinterest board of more or less everything in the book. If I spin it then I pin it. Now readers can see the whole stripped-off  deal. During the month of February every day will uncover an aspect of the plot on the Shannon’s Law Pinterest Board. Different elements of the story will be spread around bloggers of the world. I have already put up some teaser silhouette-clues. As each blogger reveals the background to each shadow, I will pin their revelations to the Shannon’s Law Board. If you wanna join in follow the board here.

All the wonderful bloggers are listed below if you wanna take a look into their individual worlds.
Shannon’s Law Pre-Launch Pinterest-Reveal Virtual Book Tour  List of Blogs and Dates:
…and the launch day online virtual tea party:
https://www.facebook.com/ShannonsLaw   28th Feb

Emma thinx: You can tell a book by its trailer