The colour pink for me means Barbara Cartland, the romantic novelist. She was a deeply conservative ultra posh lady who became Princess Diana’s step grandmother I think. Apparently she did not get on with Diana and was not invited to her marriage with Charles. My personal recollection of her was when she said:

“I have the body of a young girl. I haven’t got a single line on my body. I often think I should be photographed naked”
Well, she was only 95 at the time. In fact I don’t have a single line on my body. All of mine are at least double or triple lines. I think I should be photographed by naked photographers.
She was a Dame Commander of the British Empire and a knight of the order of Saint John. She wrote  a huge number of novels and holds the Guinness Book Of Records title for the most novels published in a year – 23 titles in 1983. It makes NaNoWriMo look pretty limp. In all she sold 1000 million books, mainly romances but also about the health benefits of honey and vitamins.
But, her writing was but a small part of the story. She is also credited with inventing the idea of towing gliders behind powered aircraft as a means of defeating Nazi Germany on D day. It is widely rumored that in in order to convince the Air Ministry of her discovery, she wore a wing commander mustache. Quite simply the top brass would not take her seriously dressed in pink chiffon. This is one of the great untold stories of World War 2. Anyone doubting the truth of this should check out the 1984 Bishop Wright Air

which acknowledges her contribution.
The woman was a marvel. She was involved in racing cars and brought out an album of love songs recorded with the Royal Philharmonic Orchestra. Reading her life story is an inspiration. Just think – all her heroines were gasping horrified virgins. Now that’s where I’ve been going wrong!
Now, Babs is the last of my hairy honeys. All of these women lived in the daring spirit of Movember. Now you can do your bit and buy the bloody book. Let’s Hear It For The Boys 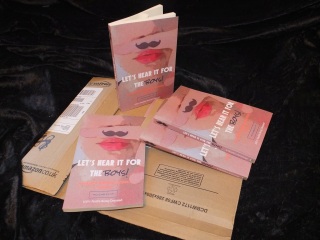 Emma Thinx: Every candy floss is heavy with a child’s hope.