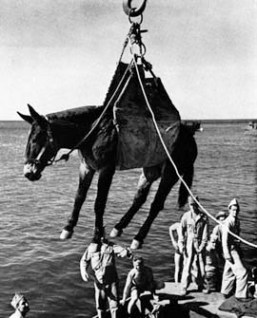 A man has appeared in court in London charged with assaulting a police dog that was chasing him. Somehow I suspect that if he had assaulted a police officer very little would have been made of it. The alleged villain is called Lukasz Sklepowski, 28 years of no fixed address. The dog is named “Zincan”. I bet the get well cards and choco dog treats are already arriving at Scotland Yard. In 1982 a horse of the household Cavalry was injured in a terrorist nail bomb outrage in London. The horse received more cards and gifts than all the soldiers killed and injured that day. Sefton eventually recovered enough to return to duty. It was probably the biggest PR mistake that the IRA ever made. To me it seems only fair that poor beasts with no choice should be seen as special heroes. Those old newsreel shots of mules being craned onto boats to go to war do pull a tender chord.

Of course it is romantic to think of Mountain Rescue Dogs. Given the chance I would like to go out with rugged guys and rescue mountains in return for some chocolate and a head massage. All manner of special rescue and crotch sniffing drug dogs deserve our applause. Some working mutts will never make the front page, yet their contribution to our lives is beyond price. We need look no further than Alf – the workshop dog. Imagine the problem of a bus coming back from a trip with football supporters. In addition to beer cans, sweet wrappings and crisp packets, there are certain to be all manner of Kentucky fried wings and burger bits all around the cabin. Alf is placed on board by his handler and within minutes every shred of chicken batter and burger bap is discovered and devoured. If ever a dog deserves the eco-reycle medal of gallantry it is Alf.

I’ve just come back from the movies where I have been watching Woody Allen’s Midnight in Paris. This is a simply fabulous film. It is witty, philosophical and just so sumptuously photographed. It is worth seeing just for the pictures of Paris. There is a great cameo role by Carla Bruni, wife of President Sarkozy. I always find that kinda stuff weird – like watching a U.S. president in a cowboy film. Nah – that’s just too far fetched.